CORONAVIRUS. How we deal with it

Origin of the campsite
Old name
Empuriabrava, the village beside us
Social media

The campsite Internacional Mas Chalet was owned by a Dutch family, Landmann, that later went to Canada.

The campsite Amberes pertained to a family, Le Metayer, composed by a French (Guy) and a Belgian (Viviane), who left later to Alicante and created the campsite International la Marina.

The campsite L'Estrella was owned by a group of investors of Barcelona, which had bought it to the family Arnau of Castellò d' Empùries.

The apartments Limar, a property of a Belgian family, Poppe, were located between the campsite International Mas Chalet and the campsite Amberes. In fact, it appears that there was an agreement for their clients to pass through these two campsites.

At the beginning of the 2001, the director of the campsite L'Estrella since 1993, Mario Sol, retires. The group of investors of Barcelona decides then to sell the campsite. After long negotiations, finally towards half of July of 2001 the campsite is bought and joins the campsite Internacional Amberes. 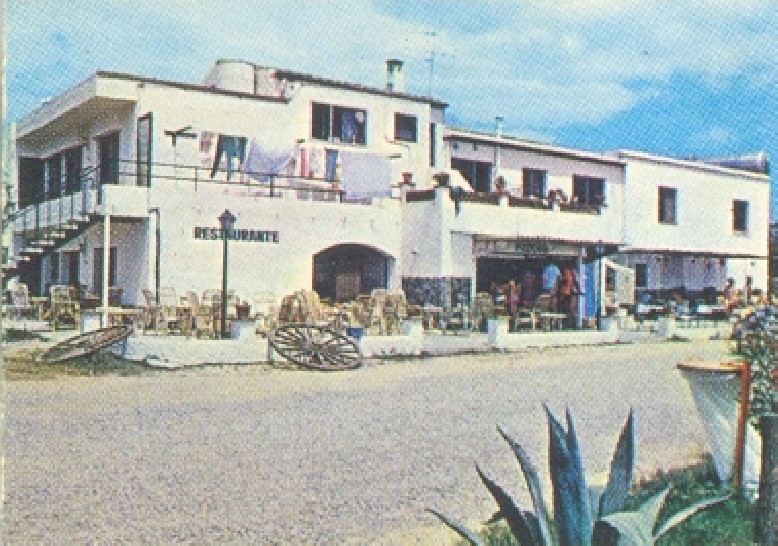 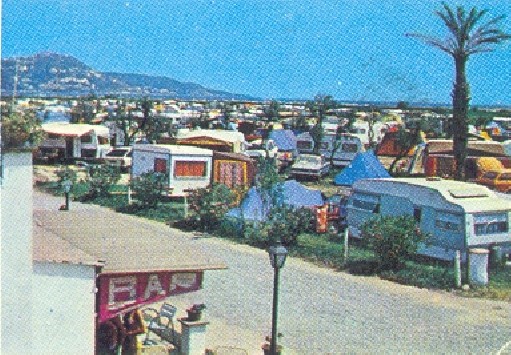 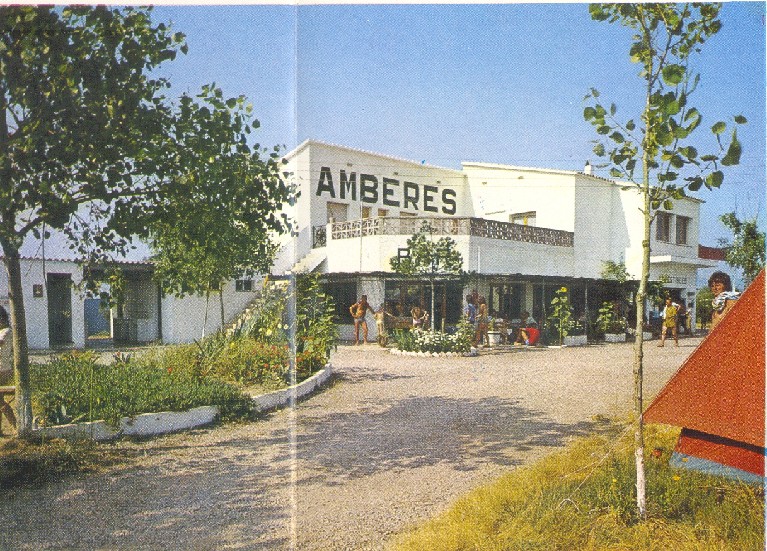 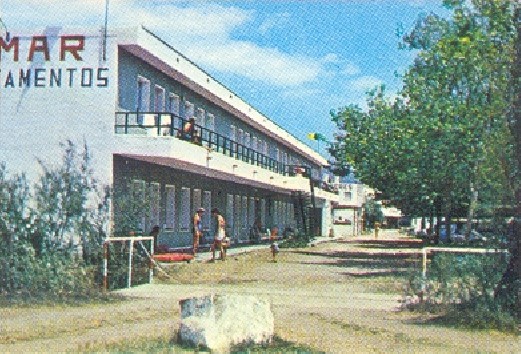 Initially, pitches in the campsites International Mas Chalet and Amberes were not clearly delimited, and the clients were installed according to the available space and their needs. Because new campsite legislation required delimited pitches, we eventually arranged all the terrain accordingly.

Also at the beginning, the terrain had only a few small trees, therefore one of the first tasks was to plant hundreds of new trees. 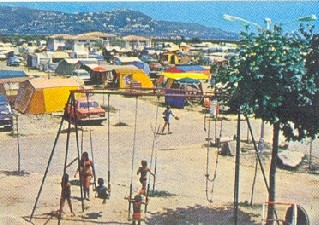 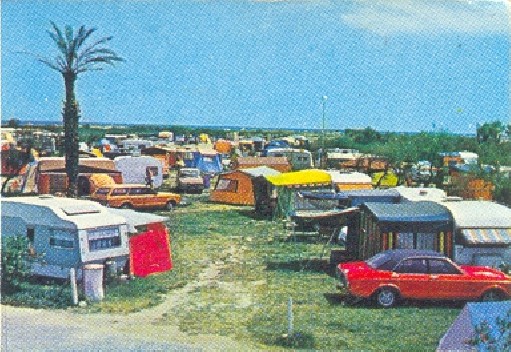 The terrain of the campsite, almost completely flat, and with water that could be found already at a few centimetres depth, these conditions turned strong rains into a very probable risk of flood. This problem was solved by adding much ground and installing a complex drainage system. 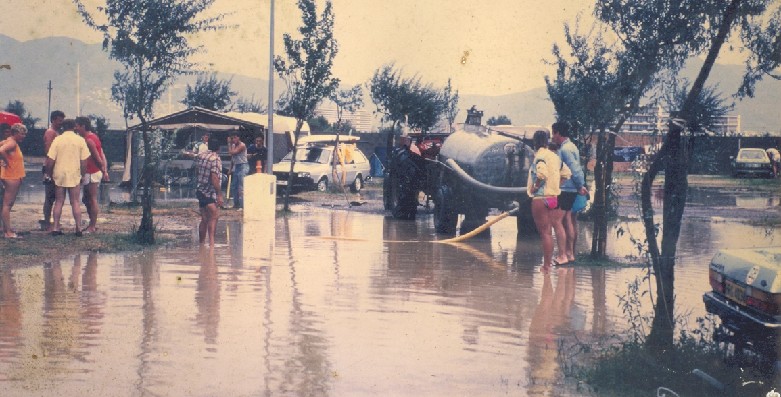 The reception of the camping International Mas Chalet was only a small caravan. At the same place we constructed the reception building, which grew larger throughout the years. The restaurant at the entrance also grew, with more space inside and outside.

The year following the joining of the campsites International Mas Chalet and Amberes, we built a swimming pool.

At the end of 2011, a small change but of great significance: the campsite name changes from 'International Amberes' to 'Rubina Resort', as the area is called 'The Rubina' and also the beach in front of us is called 'Rubina Beach'. Anyway, at this point, the camping bears little resemblance with the union of the two initial small campsites. 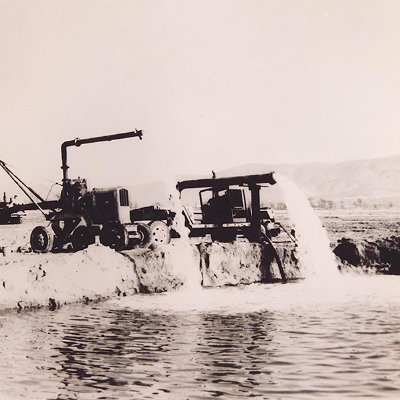 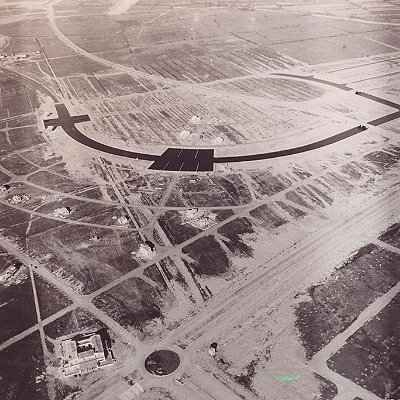 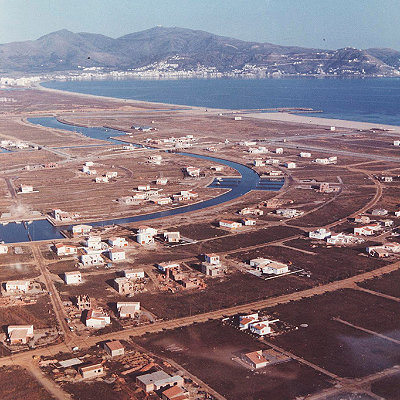 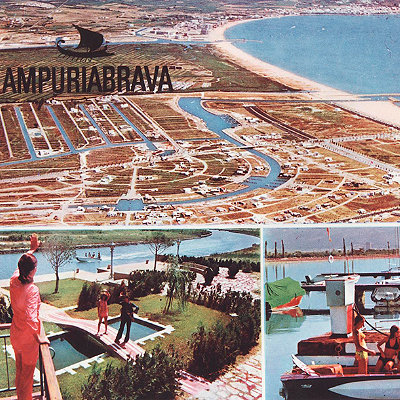 The area that now occupies Empuriabrava were lands dedicated to the agriculture and to the pastures, in which only five farms existed (also called "cortals"). In 1964 a project was presented to urbanize the zone between the rivers Muga, Salins, the road of Figueres to Roses and the sea.

The project, called "Partial Planning Plan for Ampuriabrava, 1st phase", contained the idea of the urbanization crossed by a grid of channels, the first one with these characteristics in the Iberian Peninsula, and also included a small landing strip for light aircraft and the construction of an international flying club. November 24, 1966 the provisional approval is offered and June 27, 1967 the Provincial Commission of Town Planning and Architecture gives the final approval to the project.

Parallel to the building work, an intense promotional campaign is carried out, mainly in Germany but also in France and in the Benelux, that obtains enough success: the idea is quite attractive and the prices turn out to be very accessible for these countries. Thus a high quantity of foreign people acquire plots or dwellings in Empuriabrava.

In 1975 the second phase of the plan is approved, and at the end of the seventies the Spanish population began to surpass the Germans in the acquisition of building permits.

In the year 1980 the area passes from the hands of the development business to those of the City Hall. At present Empuriabrava occupies an extension of some 503'3 hectares, with some 15.000 dwellings. Of the total surface of the urbanization, the 64% corresponds to buildings, 13% to roads, 10% to green areas and sports and another 10% to channels and harbours. Most of the surface built is destined to buildings with garden, followed by groups of houses and later, the blocks of flats and apartments. The success of Empuriabrava reflects in a population of about 80.000 people during the months of summer, although only around 5.000 people are registered.

Would you like to work with us? In general, each season we start the selection process in January-February. We prefer people who live nearby, as we are committed to local development and do not offer accommodation.

Please send us your CV to feina@rubinaresort.com and include the following:

Send the CV in PDF, MS-Word or in plain text.


Some jobs and their requirements are:

Pursuant to the provisions of Regulation (EU) 2016/679 on the protection of personal data, it notes that:

Personal data contained in your resume and that we receive, will be incorporated into the database that the company uses to select people to cover vacancies or newly created places. Only to the department of personnel selection will have access to that data. The responsible for the processing of such data is Rubina Resort S.A.

The data that you provided, as well as your resume, will be permanently deleted after one year from the date of its receipt. In the event you want your data to be removed before the term indicated, or if you prefer to stay in the database of the company to cover future places, it must expressly notified, by sending an email to feina@rubinaresort.com.